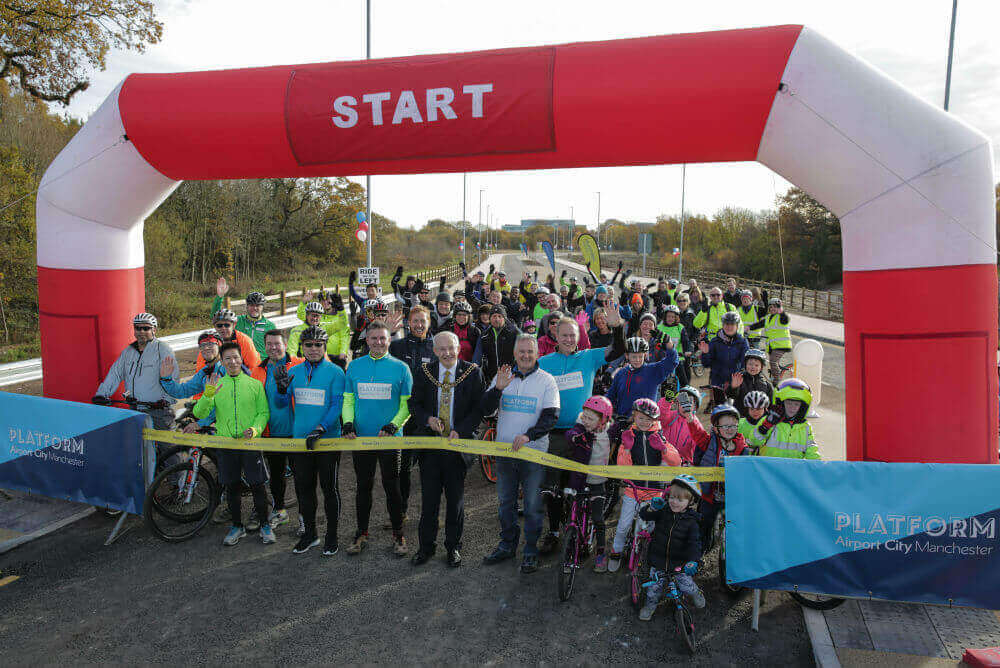 Organised by the £1billion development project’s joint venture partners, in conjunction with British Cycling, more than 100 cyclists of all ages had the unique opportunity to ride around a 1km loop of the new road prior to its opening to traffic.

The Lord Mayor of Manchester presided over the event, accompanied by the Airport City Manchester joint venture partners, to cut the ribbon to officially launch Enterprise Way and commence the start of the community cycle ride.

The construction of Enterprise Way began in March 2017 and was delivered by main contractor and Airport City JV partner, Beijing Construction Engineering Group International (BCEGI). The new link road, on the site adjacent to Manchester Airport, forms a key element of the infrastructure that will connect new development plots to the rest of the landmark £1billion site and the wider transport network.

The ‘Let’s Ride’ Pop-up event also included a lively event village featuring local food, drink and entertainment, as well as hosting a number of bike-related operators, including Mobike, Bambino Biking, Dr Bike and Wheels for All.

Lynda Shillaw, CEO of MAG Property and Airport City JV partner, said: “We’re creating a vibrant community at Airport City Manchester and we’re focused on promoting lively and engaging ways to bring different people together. We’re delighted to work in partnership with British Cycling to host the Airport City Community Ride to officially launch the opening of the new £15m Enterprise Way in a fun and healthy way.”

Joel Lavery, Head of Partnerships at British Cycling, said: “We were delighted to team up with Airport City Manchester for the fantastic community cycling event on the new Enterprise Road. We’re incredibly excited about the enormous opportunities here in our home city of Manchester as a result of the Airport City project, and it’s great that we’re able to help engage local communities and businesses through cycling from the very beginning.”

As one of the UK’s largest business destinations in development today, Airport City Manchester has already seen the creation of up to 3,000 new jobs and attracted substantial investment across the 821,000 sq ft developed to date, including high-profile global companies including Amazon and DHL.

Airport City Manchester will continue set to generate major economic benefits to Greater Manchester and the wider northern region, through the creation of up to 16,000 jobs over the next 10-15 years and the Enterprise Way Community Ride also presented the opportunity to activate the initial part of the Airport City CSR strategy, which is focused around placemaking, health and well-being and community engagement.

The delivery of Enterprise Way also highlights the scale of this unique site and frames the wider development opportunities across the Airport City scheme, following the significant 45 acre land sale at Global Logistics to TPG and Stoford in July 2017. This latest project is part of the £30m investment that has been committed by the Airport City Manchester JV partners into the development so far.

Dongwen Yu, lead director at BCEGI said: “I am pleased we have delivered the building of Enterprise Way on time and on budget. It is a very important milestone as we work with our partners to unlock the full potential of Airport City.”

Simon Eastwood, Managing Director at Carillion Developments and Airport City JV partner, said: “It’s been a really important year at Airport City Manchester, which has included the delivery of our first buildings, major infrastructure and a significant 45-acre land sale at Global Logistics, which has set the pace for what will be delivered in future. The opening of Enterprise Way highlights the scale and opportunity across this unique site and brings the range of development opportunities to life.”

Councillor Susan Quinn, Chair of GMPF Property Working Group, an Airport City JV partner, said: “Airport City Manchester is a really exciting location for occupiers, and as we make significant progress on the development we have substantial interest from investors and operators for a number of hotels. We’re also working with occupiers who are looking to develop campuses to meet both their office space requirements for today and to embrace a changing future.”