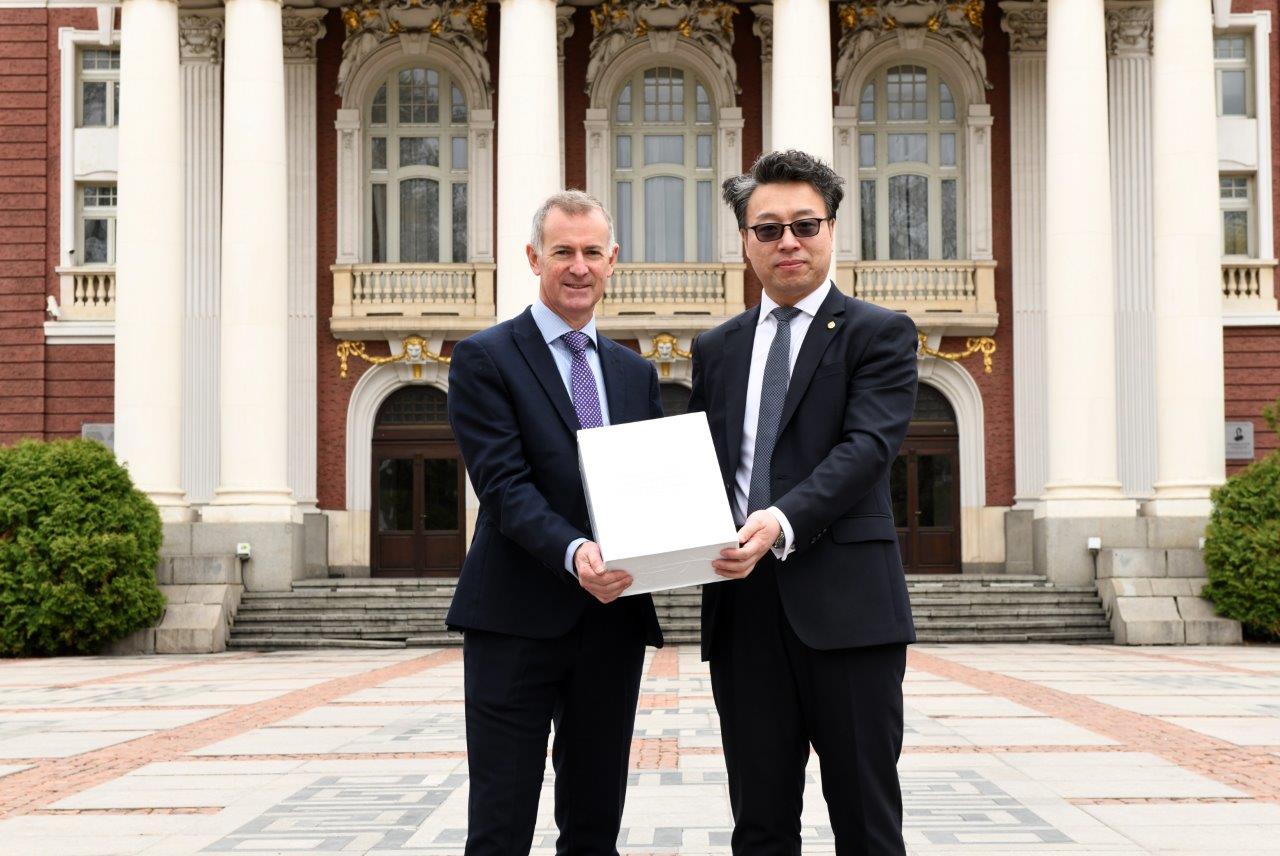 Tony Lavan of MAG and Yu Dongwen of BCEG in Sofia with the submission.

The competitive concession process was started on 5th July by the Bulgarian Government, and Beijing Construction Engineering Group (BCEG) and Manchester Airports Group (MAG) had been expected to participate after announcing its intention at a press conference in Sofia in October 2018.

MAG already operates three major airports in the UK at Manchester, London Stansted and East Midlands and provides services to six airports in the United States. Its UK airports serve over 60 million passengers per year, to over 270 destinations via 70 airlines. It is currently investing over £1.5bn (3.2bn BGN) in its airports in the UK, while BCEG is currently building one of the largest aviation construction projects in the world: Beijing Daxing International Airport, which will be the world’s largest airport and recently completed its first test flights.

The first phase of Beijing Daxing project comprises four runways, 268 aircraft parking bays and 700,000 square metres of terminal. It is also expected to operate 9 runways in order to accommodate 620,000 flights and 100 million passengers each year.

BCEG has a strong track record of delivery in the aviation sector. To date, it has delivered over one million square metres of new terminal floorspace, 15 major cargo/technical hangers and hundreds of kilometres of runways, taxiways and aprons.

The partnership between MAG and BCEG is long-standing, having been established in 2013 to develop Airport City Manchester. The consortium has developed a strong, mutual understanding and this has continued into building a shared vision for realising the potential of Sofia Airport.

The Anglo-Chinese consortium’s submission to the Government includes significant plans for the redevelopment and reconfiguration of existing terminals at the airport, as well as designs for a brand new “Terminal 3” which, when complete, will ensure Sofia has an airport fit for its position as a European capital city.

Xing Yan, Regional Director of BCEG International Co. Ltd. said: “By successfully submitting our bid with our partners MAG, in the concession tender, we have the opportunity and ability to completely transform Sofia Airport and the experiences of the millions of people that use it every year. BCEG has a great track record of delivering projects of major importance like this on time, on budget and to the highest quality.

“This would be the first of many major construction projects on and around the airport estate, and we look forward to working closely with MAG improving the transportation infrastructure and placing Sofia Airport firmly on the aviation and tourism map.”

“We are extremely proud to be part of the team submitting our proposal for this flagship scheme. Sofia international airport will contribute significantly to the enhancement of the area but also contributing to the continued success of Bulgaria and its people.”

Andrew Harrison, CEO, Airport Services, MAG said: “As we promised last year, MAG has made its formal submission to the Bulgarian Government. It is an exciting moment for us, as we truly believe that Sofia Airport has enormous potential to deliver further connectivity for Sofia. This in turn will help stimulate additional economic growth and tourism throughout Bulgaria.”

“We have spent much of the past two years in Bulgaria, hearing from businesses, and, most importantly, the people of Sofia, about what they would like to see in a new, redeveloped airport.”

“We at MAG believe that this concession process will be hugely beneficial for Bulgaria as a whole and that, together with BCEG, we have a compelling offer. We are thrilled to be taking part.”